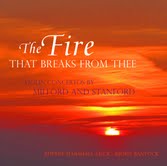 by the English Music Festival

along with Stanford's second violin concerto

EM Records discs continue to attract a high profile and extremely positive reviews – in particular, The Fire That Breaks From Thee: Violin Concertos by Stanford and Milford, has been praised in the musical press, with Malcolm Hayes in the BBC Music Magazine commending “Marshall-Luck’s solo playing, whose handsome tone (full but never gross) and laser-like tuning are remarkable in themselves”, and Robert Matthew-Walker commenting in International Record Review that “I have no doubt that Milford’s Violin Concerto is one of the great discoveries of twentieth-century English music to come to light in the twenty-first”. Andrew Achenbach, meanwhile, of Gramophone, noted of the Milford: “dashingly committed treatment it enjoys, too, from Rupert Marshall-Luck, who receives uncommonly fine support from Owain Arwel Hughes at the helm of the BBC Concert Orchestra”, and went on to agree with Matthew-Walker, that “to my mind, this powerfully affecting 38-minute canvas undoubtedly constitutes a major find and lovers of the English pastoral tradition should lose no time in making its acquaintance.”